Hialeah reflects the diversity of the northwest Dade area, and points proudly to the many facets of this growing multi-cultural community. From its strong and steadily-growing business and industrial sector, its wide variety of quiet and stately neighborhoods, its system of neighborhood parks and recreational facilities, and its cultural assets, to the "Grand Dame" of the horse-racing industry, Hialeah Park - Hialeah has it all!

Its Indian name, meaning "High Prairie," evokes a picture of the grassy plains used by the native Indians coming from the everglades to dock their canoes and display their wares for the newcomers of Miami. This "high prairie" caught the eye of pioneer aviator Glenn Curtiss and Missouri cattleman James H. Bright who saw its great potential in 1921.

Even in the early "Roaring 20s" Hialeah was the place to be. You could chose from the Spanish sport of jai-alai or greyhound racing. You might even catch one of the silent movies like D.W. Griffith's, The White Rose made at the Miami Movie Studios located in Hialeah. Although the great hurricane of 1926 brought to an end many things it could not quench the spirit of those who knew what Hialeah could be. 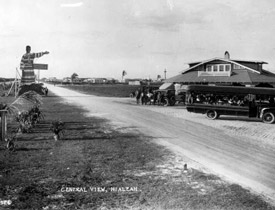 In the years since its incorporation in 1925, many historical events and people have been linked with Hialeah. The opening of Hialeah Park in 1925 as a horse track received more coverage in the Miami media than any other sporting event in the history of Miami up to that time and since then there have been countless horse racing histories played out at the world famous 220 acre park.

The Park's grandeur has attracted millions, included among them are names known around the world such as; the Kennedy family, Harry Truman, General Omar Bradley, Winston Churchill, and J.P. Morgan. Hialeah Park also holds the dual distinction of being an Audubon Bird Sanctuary and being listed on the National Register of Historic Places. The famous aviatrix Amelia Earhart said her final good-byes to the continental U.S from Hialeah as she left on her ill-fated flight around the world in 1937.

From a population of 1,500 in 1925, Hialeah has grown at a rate faster than most of the ten largest cities in the State of Florida since the 1960s and holds the rank of Florida's fifth-largest city, with more than 236,000 residents. The city is also one of the largest employers in Dade County. Predominantly Hispanic, Hialeah residents have assimilated their cultural heritage and traditions into a hard-working, diverse community proud of its ethnicity, as well as its family oriented neighborhoods. The residents and governmental departments empowered with serving the people are committed to preserving a quality community atmosphere for working and raising families.

Hialeah is proud of its local government. The Fire Department is nationally ranked as Class I. There are fewer than twenty five such departments in the entire country. This entitles businesses to a rate reduction in their insurance and gives the residents confidence in the ability to protect and to serve. The Police Department is made up of men and women dedicated to not only protecting the community but also educating its youth through the nationally acclaimed DARE program and the Early Intervention Program. The more than 100 acre network of parks and recreational facilities has made Hialeah a leader in the sun and fun of South Florida. The pro-active strong mayor form of government combined with the legislative action of a seven member city council, assures the community of an efficient response to its needs.