The City of Hialeah is a full service city and, by population, is the fifth largest city in the State of Florida.

Hialeah is a Strong Mayor / Council form of government.

Role of the Mayor 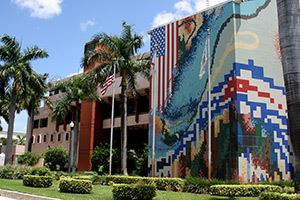 The Mayor is not a voting member of the council and has veto power which may be overridden only by a 5/7ths vote of the Council.

Role of the City Council

The City Council is made up of seven individuals responsible for approving the budget and passing legislation necessary to govern the City.

Meetings of the Mayor and Council are open to the public. The regular meetings take place at 7 p.m. at City Hall on the second and fourth Tuesday of each month, unless otherwise posted.

Both the Mayor and Council are elected by the people of Hialeah and serve a four-year term. All elections are city-wide, however, the council seats are by group. Registered voters may vote for a member in each group that is up for election.

The City Clerk conducts all elections and related functions.

There are various advisory boards that meet regularly to conduct business that will assist the Mayor and City Council in their duties. All board members are residents and registered voters of Hialeah. Some of the boards are: