The Hialeah Public Libraries provide free and equal access to information resources, services, and spaces that promote lifelong learning, strengthen our community, and contribute to the progress of knowledge. 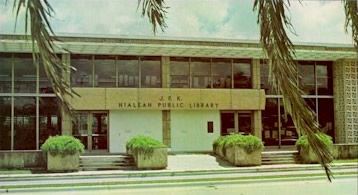 The City of Hialeah's John F. Kennedy Memorial Public Library first opened its doors in July of 1965. Prior to this, Hialeah's first public library predates the city's incorporation (1925) by one year. At that time, the area known as Hialeah had a population numbering close to 1,000.

In 1924, the Hialeah Women's Club came up with the original idea for a local library. Ms. Lua Adams Curtiss, an active member of the club and mother of the famous aviator and developer Glenn Curtiss, persuaded the Women's Club to start a library with donated books.

A book tea held by the Club in 1924 netted approximately 50 volumes, and later on, a few more were added through door-to-door collections and other civic events. At last, enough books were collected to warrant the opening of the city's first lending library, which just happened to be in a single room in the home of the Club's president, Ms. J. Sommers Garwood.

The following year, more books were added to the collection following the death of a local benefactor named Ms. Martha Holden. The added books were welcomed but Ms. Garwood's home was unable to accommodate the larger collection.

Hialeah's School Board came to the rescue by offering a portable classroom at the city's only school, South Hialeah Elementary. There the library remained in operation for a year until the destructive hurricane of 1926. Both the building and the collection were badly damaged.

In no time, the persistent members of the Hialeah Women's Club went right back to work again. After soliciting more books from all over town, they succeeded in getting a single room at the City Hall building to serve as temporary quarters.

The temporary quarters took on a more permanent role as the library continued to operate in the City Hall building for the next two decades. It would not be until the early 1950s, when Hialeah's population reached about 40,000 that the library would be able to settle into a building of its own.

A Building of Its Own

The library's new location had been a covered water tower adjoining a fire station. The two-story structure was an improvement in terms of size over the one-room arrangement of the past.

The library's collection consisted primarily of book donations at a time when the city still made no funding appropriations for the purchase of books. The city, however, did provide the building, paid the utilities, and hired a part-time librarian named Ms. Elsie Ramer. Under Ms. Ramer's guidance, the library was opened close to twenty hours per week, and slightly less hours during the summer.

The Lua A. Curtiss Branch Library

In a few short years, it was obvious that a newer and larger facility was needed for the city's approximate 40,000 residents.

In 1958, the Hialeah Public Library, known today as the Lua A. Curtiss Branch Library, opened its doors in the then more populous part of the city, the eastern side of Hialeah. The new facility was hailed as a long-awaited facility by the citizens of Hialeah, and became instantly popular.It was still a single story, one-room building, but it was larger, cleaner, well lit, and had enough space for tables and chairs. It even boasted a separate children's room for the delight of younger readers.

The library was opened four days a week from 2 p.m. to 8 p.m. In no time, its collection of 14,000 volumes attracted 10,000 members. Ms. Marge Harshbarger, the city's new full-time librarian, reported that the new facility was "full all the time."