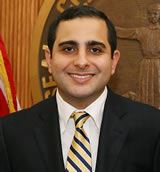 Councilman Paul B. Hernandez was born, raised, and educated in the City of Hialeah. Coming from modest roots, his mother, Lily, worked as a receptionist and his father, Paul Sr., served his community as a police officer. While growing up, Paul often sought the guidance and teachings of his grandparents, aunts, and uncles to learn more about the world as they saw it. It was then that he gained a true understanding of the American Dream.

Councilman Paul Hernandez is guided by two of his favorite quotes:

Prior to running for elected office, Paul Hernandez worked as an aide to two Miami-Dade County Commissioners. His foray into public office began when he was appointed by Mayor Julio Robaina as a Commissioner to the Hialeah Housing Authority.

After nearly a year at the housing authority, he was chosen by Mayor Carlos Hernandez and the City Council to fill a vacancy that had been created in the Council. During this time, Councilman Hernandez took strong positions in crucial legislative matters such as the Elderly Relief Act and the elimination of the red light cameras.

In November of 2011, he had the opportunity to present himself as a viable candidate for City Council to the electorate of the City of Hialeah who elected him with resounding support.

Paul Hernandez was re-elected as council member for the City of Hialeah on November 5, 2013.

Through his father's work with The Miami-Dade County Police Department, Paul Hernandez has always understood and appreciated the value of public service. Having been born with a congenital heart defect, he chose to become involved with the American Heart Association where he served as the youngest member of the Executive Leadership Team for the Miami-Dade County Heart Walk.

Paul has also represented Miami Children's Hospital and all congenital heart patients before various governing bodies including the Miami-Dade County Commission and the state of Florida's Agency for Healthcare Administration (ACHA) and has played a role in the passage of legislation that is to the benefit of the rapidly growing congenital heart community.

Paul believes, "A public servant is defined by accessibility, humility, vision, and the ability to enhance the quality of life of those that he or she has the privilege to represent."