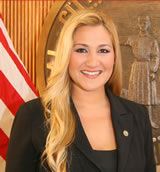 Councilwoman Katharine Cue-Fuente was born and raised in the City of Hialeah. She spent most of her youth participating in the City's Cultural Arts Program. She graduated from Monsignor Edward Pace High School and from an early age demonstrated a true concern for the community.

During high school, Katharine served on the Peace and Justice Club, Habitat for Humanity and Future Leaders of Tomorrow while donating countless hours of community service to the City of Hialeah as a volunteer for the Adult Centers, Special Events and Children's Programs.

Councilwoman Cue-Fuente earned her Bachelor of Arts in May 2009 with a major in Organizational Leadership and a minor in Public Relations. She graduated with high honors. She plans to continue her studies and earn a Master's Degree.

In the summer of 2010, she married Jorge Fuente.

During her young life, Katharine's concern for others has always been evident as she was involved with several charities; "La Liga Contra el Cancer," The American Cancer Society, Hands in Action, and ALS (amyotrophic lateral sclerosis - commonly referred to as Lou Gehrig's Disease) Therapy Development Institute.

When asked about the responsibility of service to her community, Katharine says, "Service is not only a duty, but an honor and a humbling experience."

In 2005, Katharine captured the attention of senior City of Hialeah Council members who appointed her to the Cultural Affairs Board where she was the youngest ever appointed. While on the board she had the opportunity to contribute to the development of the present cultural initiatives, such as the Art on Palm Festival, Art in Public Places and the city-wide art exhibit series.

While attending St. Thomas University, Katharine Cue-Fuente interned with the Mayor's office where she was the assistant to the Educational Liaison and to the Chief of Staff. Within two short years, her interest for the community, dedication and hard work earned her the position of the City of Hialeah's Educational Liaison.

In this role, she was responsible for the continued communication between the Mayor and the 32 schools located within the City of Hialeah, as well as the development and nurturing of PASS Partnerships with local businesses. Moreover, Councilwoman Cue-Fuente was appointed to oversee the Mayors Scholarship Fund Board and the Educational Advisory Board.

Her contribution was an integral part of the City's initiatives and opportunity to offer new educational choices to our residents.

In 2008, Katharine Cue-Fuente was appointed to the Hialeah City Council and in 2009 she ran and won by 91% of the vote and became the youngest councilwoman in the City's history.